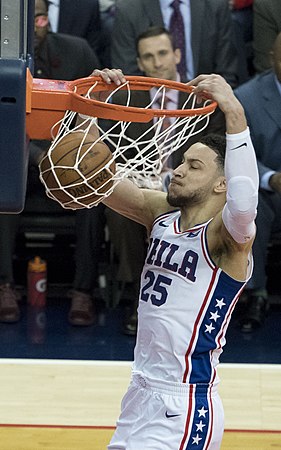 Benjamin David Simmons (born 20 July 1996) is an Australian professional basketball player for the Philadelphia 76ers of the National Basketball Association (NBA). He played college basketball for one season with the Louisiana State University (LSU) Tigers, after which he was named a consensus first-team All-American and the USBWA National Freshman of the Year. Simmons was selected with the first overall pick in the 2016 NBA draft by the 76ers. After sitting out a year due to an injured right foot, he was named the NBA Rookie of the Year in 2018. Simmons was named NBA All-Star in 2019 and 2020.

Simmons attended Box Hill Senior Secondary College before moving to the United States to attend Montverde Academy in Montverde, Florida. In his only season in college, LSU began the season with high expectations, but failed to qualify for the NCAA Tournament. Simmons left school to enter the NBA draft, becoming the third Melbourne-born number one …Read more on Wikipedia

Work of Ben Simmons in the library