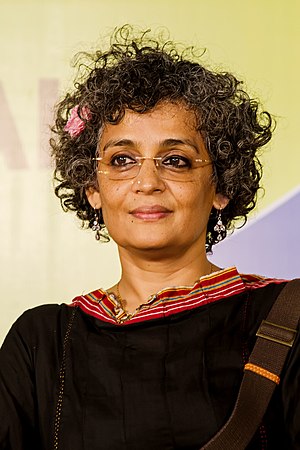 Suzanna Arundhati Roy (born 24 November 1961) is an Indian author best known for her novel The God of Small Things (1997), which won the Man Booker Prize for Fiction in 1997 and became the best-selling book by a non-expatriate Indian author. She is also a political activist involved in human rights and environmental causes.

Arundhati Roy was born in Shillong, Meghalaya, India, to Mary Roy, a Malayali Syrian Christian women's rights activist from Kerala and Rajib Roy, a Bengali Hindu tea plantation manager from Calcutta. When she was two, her parents divorced and she returned to Kerala with her mother and brother. For some time, the family lived with Roy's maternal grandfather in Ooty, Tamil Nadu. When she was five, the family moved back to Kerala, where her mother started a school.

Work of Arundhati Roy in the library